A Tribute to Professor Daniel I.C. Wang
A Legend We All Love, Respect and Admire

Danny is an academic father and mentor to me. He taught me to be a better biochemical engineer and more importantly, he taught me to be a better person. Danny has tremendous passions for Biochemical Engineering profession, for the community, for his students and colleagues, for his families and friends, and for the countless people who admire and look up to him professionally and personally. He has taught us to love what we do and to do what we love.

I first knew Danny and his remarkable research when I was working on my Master's thesis under the supervision of Professor Larry Erickson at Kansas State University. I quickly realized that the Biochemical Engineering center of universe is at MIT Danny's Lab. And, I wanted to do my Ph.D. study under his supervision. I was admitted to MIT's Chemical Engineering Department shortly after. Danny was very kind to accept me as one of his doctoral students. We had regular meetings. Danny was critical yet constructive, confident yet humble, tough yet caring. He had this exceptional analytical mind that easily cut through complex problems and found probable solutions. I would walk out of his office fully charged and ready for more actions. Those meetings provided me the best learnings in my life.

In 1995, at Danny's inspiration, Professors Wen-Teng Wu and I-Ming Chu and I founded the "Biochemical Engineering Society of Taiwan" (BEST). We built a Biochemical Engineering community, so all professors, professionals, and students would have a platform to share research results, ideas and collaborations. It was a great success. A few years later, BEST and other similar societies in Asia had joined hands to form the "Asian Federation of Biotechnology" (AFOB). AFOB has been the driving force behind many successful international conferences, collaborations and joint ventures. For me, it all started from Danny's passion for Biochemical Engineering profession and community.

Danny was recognized by many honors and awards. He was MIT's Institute Professor, the highest honor to a faculty member. Danny was a member of National Academy of Engineering and the American Academy of Arts and Science. He was a member of Academia Sinica in Taiwan. Danny received the MJ Johnson Award, David Perlman Award from ACS and the Food, Pharmaceutical and Bioengineering Award and the Institute Lecture of AIChE among others. He received honorary doctoral degrees from HKUST in Hong Kong: Catholic University, Valparaiso, Chile: and University of New Lisbon, Portugal. He was honorary professors from National University of Singapore, Shanghai JiaoTong University, Zhejiang University, and Beijing Union Medical College. Danny co-authored 5 books, published more than 250 refereed papers, and was awarded 15 patents. I had the distinct honor to co-edit a book with Danny titled "Animal Cell Bioreactors". I learned so much from Danny by working on this book from the beginning to end. He has definitely made an endearing and everlasting impact on many of his students like me. 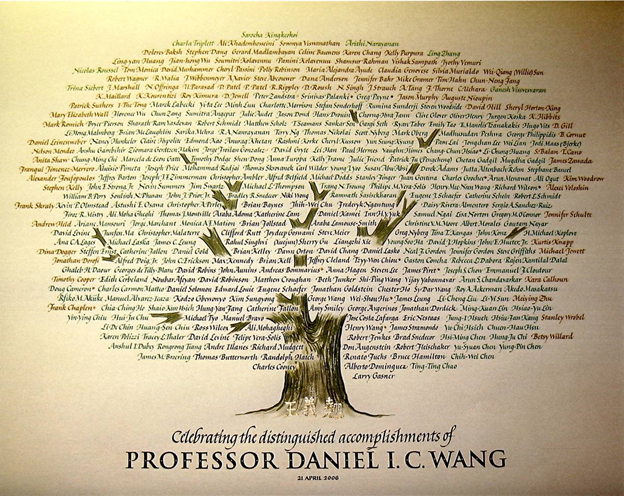 
Brian Tracy, a famous author and inspirational speaker, said: "The future belongs to the competent. Get good. Get better. Be the best." That's exactly what we all had learned from Danny's mentorship. To paraphrase what Magic Johnson told Larry Bird at his retirement, "There will never, ever, ever be another Larry Bird." I say, "There will never, ever, ever be another Danny Wang." We miss Danny and will work hard to make his legacy proud.

Our condolences and prayers are with Vicky, Keith and other family members.

Danny, we love you, we respect you, and we admire you. Rest In Peace.